The Vulnerability of Fiji in an Unsustainable World – Article by Alvaro Rodriguez, Heriot-Watt Student

This summer, Heriot-Watt post-graduate student, Alvaro Rodriguez joined Think Pacific to volunteer in the Fiji Islands. This experience helped provide tangible skills and experiences to help Alvaro pursue a dream career in sustainability and corporate responsibility. With a keen interest in environmental and sustainable development, volunteering in Fiji offered the perfect setting for him to get hands-on experience and knowledge of how climate change is impacting communities around the world. 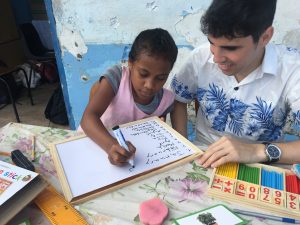 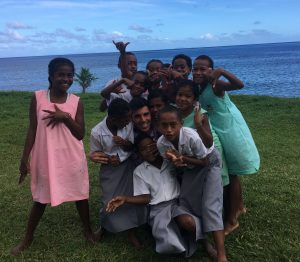 Alvaro shares his thoughts on how his time in Fiji relates to what he has learnt during his time at Heriot-Watt University.

So, without further ado, over to you Alvaro…

Only a few days ago, I returned from Fiji, having had the fortune to live one of those experiences that, in the developed countries, can be classified as “life-changing”, while in the less developed countries it is just their way of life. I have been volunteering with a group in Koro Island (Republic of Fiji), living with local families of Navaga, and promoting the development of children who attend the schools in nearby villages.

Koro is a small island located in the heart of Fiji, where about 5,000 inhabitants live, most of whom will have been greatly affected by the Tropical Cyclone Winston of category 5 (the highest level) two years ago. This cyclone caused 44 fatalities in Fiji, destroyed more than 40,000 houses, and affected approximately 350,000 Fijians (40% of the population).

In Europe, we really do not know too much about Fiji. Therefore, this article aims to shed light on the current situation in Fiji, who was the president country of the last United Nations conference on climate change, COP 23, which aimed at discussing the great challenges and threats that climate change poses for the country. This article also aims to remind people of the criticality of global sustainable development. Currently, we are living in a world in which we use the resources equivalent to 1.7 Earths, and where in 2030, if we were to do nothing to change it, we will be using double the amount of resources that the Earth can physically regenerate, according to the Global Footprint Network.

Fiji is a country made up of an archipelago of over 300 islands located in the South Pacific Ocean between the country that some may think is the furthest from UK, Australia, and the one that really is, New Zealand. It takes approximately 30 hours by commercial plane with stopovers to reach Fiji. It is a considered a holiday paradise and is visited by the same number of people as the entire Fijian population (900,000), however, as will be discovered, Fiji is much more than a holiday destination at the other side of the globe.

Given its remote location, it is interesting to add that it shares the Pacific Ocean with another island; the second largest being neither continental nor volcanic but made of plastic. More specifically, this island, with a surface area of approximately six times that of the UK’s, sums 87,000 tons of floating garbage (99.9% plastic), which is directly connected to detrimental impact on the oceanic and avian fauna. If it were a country, it would be the twentieth largest in the world, ahead of any EU member countries. In this regard, experts have estimated that, without remedial action, in 20 years there will be twice as much garbage in the oceans than at present, and in 2050, there will be more plastics than fish.

There is no doubt that Fiji is a tourist’s paradise; however, as will explained in more depth later, this will only be for as long as climate change allows it. As many are aware, 2017 has been the International Year of Sustainable Tourism for Development. In 2018, Nature Climate Change published an article that indicates tourists are responsible for 8% of total greenhouse gas emissions, which is equivalent to the total emissions from vehicles. Worldwide, one of the biggest announcements in this regard has been related to the aviation industry, which accounts 20% of the emissions derived from tourism and that is expected to double the number of passengers in the next 20 years. In particular, the International Air Transport Association (IATA) has announced the goal for 2050 to reduce net emissions of carbon dioxide produced by half, compared to 2005 levels.

In terms of its political situation, since it was decolonized from the British in 1970, Fiji has suffered several coups. The last coup happened in 2006, which caused significant losses in GDP growth, employment, investment and exports, as well as negative impacts on international cooperation for development. At present, the situation has improved markedly. In 2018 new elections are held, but it is still not widely considered a democratic country as such, with The Economist Intelligence Unit changing its consideration of Fiji from an authoritarian country to a hybrid regime, in 2014. This democratic improvement has also allowed Fiji and the EU to improve their relations since 2015, agreeing to look for common positions to address the main international challenges, such as climate change, the Sustainable Development Goals (SDGs) and the responses to international crises.

Climate change is undoubtedly the biggest challenge for Fiji and, whether we are more aware or not, along with poverty (which in turn is increased by climate change), it is also for the rest of the countries of the world. For some reason, in 2018 World Economic Forum has identified that three of the five most likely global risks, and four of the five with the greatest impact, are closely related to climate change; as well as climate change being the world trend with greater connections to other risks. These other risks that are connected with climate change are not only environmental, but also economic, geopolitical, social and technological. The current Secretary General of the United Nations, Antonio Guterres, has declared that, “climate change is still running faster than we are”.

In particular, Fiji is one of the most vulnerable countries to climate change, despite being one of the most sustainable and being a country with one of the lowest carbon dioxide per capita levels. This emphasises the unjust nature of global climate change, and how vulnerable countries are so dependent on the responsible behaviour of all other countries. In recent weeks, I have heard more than once that Fiji is like the rest of the world should be, and they are not without reason, but some reservations.

The main impacts of climate change in Fiji and other Pacific countries are obvious. On the one hand, there is the increase in intensity and periodicity of natural disasters. Without going any further, in addition to the aforementioned Cyclone Winston, the Cyclone Josie has left four other fatalities in Fiji and innumerable damages last April. On the other hand, the rise in sea level is causing, and will cause, displacement of entire populations. An example of this already occurring is from 2014, when all the inhabitants of Vunidogoloa (Fiji) had to be displaced by the effects of climate change. I have been able to observe this displacement for myself, observing houses that have been completely destroyed, and old electricity poles submerged in several metres of sea. In this regard, the World Bank, in their Pacific Possible Report, has proposed that Australia and New Zealand allow free access to the labour market for people living in the countries of the Pacific most affected by climate change.

According to the latest UNHCR report on Internal Displacement, 76,000 people had to move in Fiji due to natural disasters in 2016, which almost equals 10% of the total population. In addition, this same report shows that in the world in 2016, 24.2 million people had to be displaced by disasters, and 6.9 million by conflicts and violence. The total number of displaced people in the world exceeds the sum of the populations of Australia, Fiji and New Zealand combined, and the United Nations University has estimated that in 2050 the number of people displaced by climate change will probably rise to 200 million people, with the possibility of this figure rising to 1 billion. Also, two of the country’s main tourist attractions, coral reefs and marine turtles, are also being affected by climate change.

Regarding the fulfilment of the SDGs or the so-called Global Goals, it is important to mention that in Fiji, it is extremely difficult to monitor the indicators that measure the achievement of each of the 169 targets included in the Global Goals, due to the wide distribution of population across more than 200 islands. Therefore, until 2019, Fiji will not present its progress status in the High Level Political Forum on Sustainable Development, and it is one of the 36 countries that have not been included in the SDG Index and Dashboards Report 2017, as only 23% of the analysed indicators are available.

Likewise, it is essential to discern between urban and rural Fiji. The urban Fiji has an acceptable level of income, thanks mainly to tourism (25% of GDP), while rural Fiji lives isolated and mainly from agriculture. In Navaga Village, people rely on the cultivation of kava, taro and cassava to live. Moreover, after Winston Cyclone, 95% of the houses in the village collapsed, so the first week of each month continues to work on the construction of new houses and the cleaning of the remains left by the cyclone.

At present, no Navaga house has electricity, but some have one or two lamps that are recharged by solar energy; the nearest hospital is twelve hours away, accessible by a ferry that leaves once a week, which is the same ferry that brings the limited outside resources in to the village; many children attend school classes barefoot; and the few who study at high school must attend the only one on Koro, which is located at the other side of the island.

In Fiji it is not difficult to see children working, schools in poor conditions, and children without access to health services. In spite of everything, Fiji is the happiest country in the world, according to the latest survey carried out at the end of 2017 by Gallup International on happiness, hope, and economic optimism. This, in my opinion, perfectly sums up the optimistic nature of the Fijians to overcome the challenges they face. However, we should not confuse optimism with their objective or real level of well-being. As one Fijian told me: “we do not see the problems as a problem, but rather we focus directly on the solution”. In addition, another reason for their happiness is due to their way of community living, meaning that, at least in the villages, they share the few resources they have, and live as one large family.

Each and every one of us, from where we are right now, have the capacity and the moral duty to change the current situation of Fiji in particular, and of the world in general. The late Stephen Hawking already urged people of the need to find another planet to live in (due to climate change, epidemics and population growth, among others), and Elon Musk, is at work in the search for another. Seemingly he is trying to save the world but in actual fact, this would mean escalating the problem of displacement due to climate change to an interplanetary level. But honestly, I do not believe that neither the Fijians nor so many others could afford to pay for that trip, and probably neither you nor me. Science fiction aside, let us all work together in the fulfilment of the Global Goals, which will not only make Fiji a less vulnerable country, but the Earth a more prosperous and sustainable world.