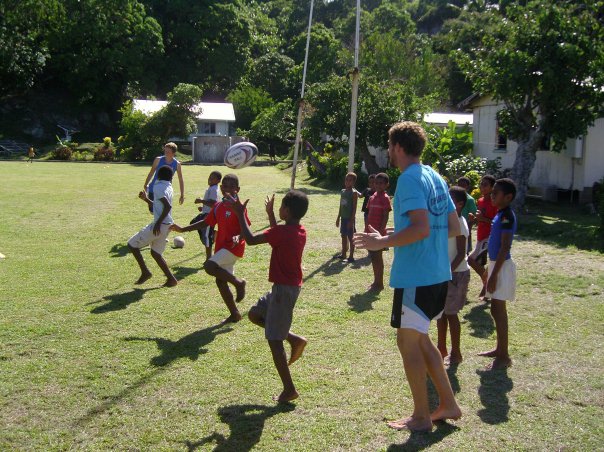 If you’re reading this, you will probably have seen all the work that the January 2010 team have done for Nasauvuki. I won’t bore you then, with a repeat account of what we’ve achieved, but instead try to give a glimpse of just how amazing daily life in a Fijian village is.

From the very moment that we came into the large bay that houses the villages of Nasauvuki, Navuti and Nasesara, we were welcomed with open arms. The boat from Caqalai to the village at the start of the project felt like a scene out of Apocalypse Now until that point, such was the sense of foreboding that we felt at going somewhere so very different to our own homes in the UK. But as soon as we entered into the bay and saw kids swimming in the sea waving to us, with their parents out fishing doing likewise, I suddenly felt a strange sensation that everything was going to be ok. This was proved right once we got into the village itself. It’s the little things that make the difference – walking through the village in the morning, pretty much every house will say ‘Yadra’ and then ‘gunu tea’ When you walk past one of the young guys, they will always shake your hand and ask how you are. This friendliness and warmth is entirely genuine, and completely engulfs you. It’s all the more touching considering that compared to us, they have so little – a tin shack, a few beds, a boat and a generator if you’re lucky.

By the end of the project, we had been made to feel so much a part of the village that it was a massive shock returning to the hustle and bustle of city life. Chris and I walked into a very modern shopping mall in Suva in search of something to eat and felt very much blinded by the lights – here we were, barefooted, dirty, attired with paint stained clothes in search of a cheap meal as people walked past us in the direction of MacDonalds wearing the latest (Fijian) fashion and not caring to say hello. That’s not a criticism of those people – in England I would have done exactly the same – but it does make you think that perhaps we are not as sociable as we could be.  I would like to think that when I get home I will make just that little bit more effort to be polite to the stranger in the street, or more friendly to the man who serves me at the shops.

Family and friends are everything on the islands. I cried like a little girl when the time came to say goodbye to my Fijian dad, Maciu, who has treated Rob (a quick shout out to him – I love you very much and would seriously consider fathering your babies) and I like sons for the past 10 weeks. It was the same with our mum, Una and our brothers Loma and John. In the village pretty much everyone is related in some way or another and they all depend on each other for help – whether it be building a new structure or going up into the plantations to find food. They can’t watch satellite TV all day or play on their PS3 because they can’t afford them, so they talk to each other, swim, or play sport for hours at a time. It’s a very healthy way of living, mentally and physically. There came a point about halfway through our time in the village when I felt very fit from all the rugby I was doing, but also incredibly at ease with the fact that we didn’t have internet, or a TV to pass the time – I was equally as satisfied just talking to the Fijian boys, answering their questions about England and asking them about their own lives and future ambitions (I came to the conclusion that you could form a regiment out of the amount of people planning to join the British Army!). It’s very easy to say this now but I hope that when I get back I’ll put aside a little more time just to talk to friends and family. It’s much more fulfilling than watching Jeremy Kyle…

If I had to pick a few moments in particular that will stay with me for a very long time, I would have to say that sitting around the kava bowl with a guitar and Fijian voices in the background was a constant happening during our time in the village that I didn’t really appreciate until we left the village. Secondly, the mass water fights during January, which really brought us close to the village. Then finishing the community hall and looking back at pictures when it was just a patch of muddy grass; Managing to teach prime numbers to Class 7 (I was rubbish at maths at school, and possibly might have had to do a quick refresh read of the textbook before I took the lesson); My young cousin Samu finally getting his colours right after all the team’s work in kindi; our final game of Fijian rugby and the rendition of the unofficial team song ‘I know the Lord’ after it…I could go on for a while.

So yeah, sorry for getting all emotional and philosophical, I’m a bit worn out myself now! I really have had the time of my life though and as I write this overlooking the clear blue sea and yet another gorgeous beach, I can’t help but think that I’ll be very sad to leave this country, where the scenery is nearly as amazing as the people. A monumental vinaka must go not only to the people of Moturiki and more specifically Nasauvuki, but also to ‘UK Guy’ Simon, Harry, Tim and Benji for all the amazing work they’ve done in  keeping the project on the straight and narrow whilst all the while keeping a smile on their face. A return visit is by no means out of the question, but for the time being it’s time to say ‘moce’.